We left the Nordic Museum and as it was already after 5pm and most places were closed so we headed back into the city on the HOHO bus which took us on a complete tour around Stockholm, finally landing back at the Central station where we caught out bus back to Lilla Essingen, to relax a bit and get ready  for the next day ….. 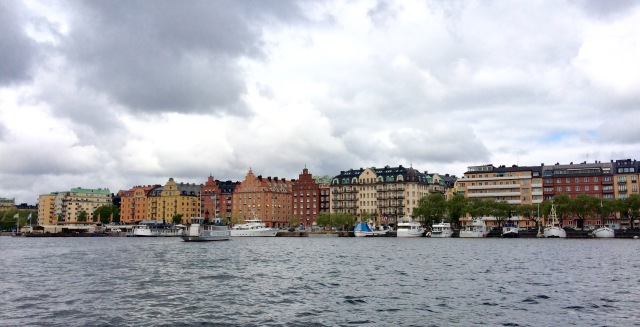 The next morning we left home reasonably early as we had plenty to see that day, after catching the bus into the city we boarded the HOHO bus to enable us to get around to the Vasa Museum which is one of the most popular attractions in Stockholm.  When you walk in the door what you see is unbelievable and for us totally unexpected.  A quick story is that the wooden ship Vasa built in 1626 by many men and launched in 1628, set sail one morning on its inaugural trip only to list after sailing only 1,300 mtrs in not overly rough weather, take in water through its cannon ports and sink to the bottom of the harbour.  She fell into obscurity after  all her valuable bronze cannons were salvaged in the 17th century until being re-discovered in the 1950’s and was salvaged intact in 1961 …….. If interested  en.m.vikipedia.org Vas ship …… Good read..

The way that this museum has been displayed has to be seen …. The photos below show what we saw, the light is very dim inside as the entire building is climate controlled, even to the point that on wet rainy days they only allow so many visitors in at one given time due to the rise in air moisture and the preserving of a totally wooden ship that has been underwater for over 300 years.

The verdict although never really founded was that the ship did not carry enough stone ballast and was far to narrow for the proportions of the ship …… How was this overlooked ??

After leaving that fantastic experience we walked a couple hundred metres into the Absolute Vodka Museum, quite a different museum ……  Photos show what we mean …….