We reluctantly left Dijon and headed into Switzerland for a couple of days drive around here before heading across and into Bavaria from the South West …. After a few hours driving we entered Switzerland, drove around the corner ( wrong corner ) and then entered Switzerland a second time, all in less than 5 minutes ??  We drove south heading for our destination Aubonne, there were no direction signs but our GPS seemed to know where we wanted to go, the GPS is a MUST driving in Europe, it would be catasprohy without it !!!   Finally we came upon a sign pointing us up into the vineyard covered steepish hills and into the small but quaint town of Aubonne which overlooks the huge Lake Leman, the border of France & Switzerland runs through the middle of this lake.  Aubonne was beautiful but a huge problem to navigate in our Camper, we got stuck a couple of times in one-way and dead end streets but after a while driving around we realised that it would be impossible to park anywhere here for the night.  After exploring a little more we headed off in an ‘ off highway ‘ route east sort of toward Bavaria.  After only a short drive we turned up a small road and found a little town called Saint-Barthélemy, we picked a spot in the local church car park, had some lunch and headed off on our bikes to look around this little rural region.  This is part of the area that not  2 weeks ago had torrential rain and local flooding, it was very visible in the fields and on the local soccer field, but they still had a local match playing.  We rode a few klms out of town through the planted fields and came upon a beautiful small farming area / community in which the families farm, live in half of their huge barns and keep the farming produce, firewood, animals and everything else in the other half, all very organised and neat and tidy.  This area was truly amongst the most pretty we had seen so far and we spent a couple of hours riding around here, looking, taking photos.  It was a bit like a ghost town as nearly everybody was inside watching the EuroCup football on TV, it is absolutely huge over here in Europe ………….

PHOTOS OF THE REGION OF VAUDE ( Switzerland ). 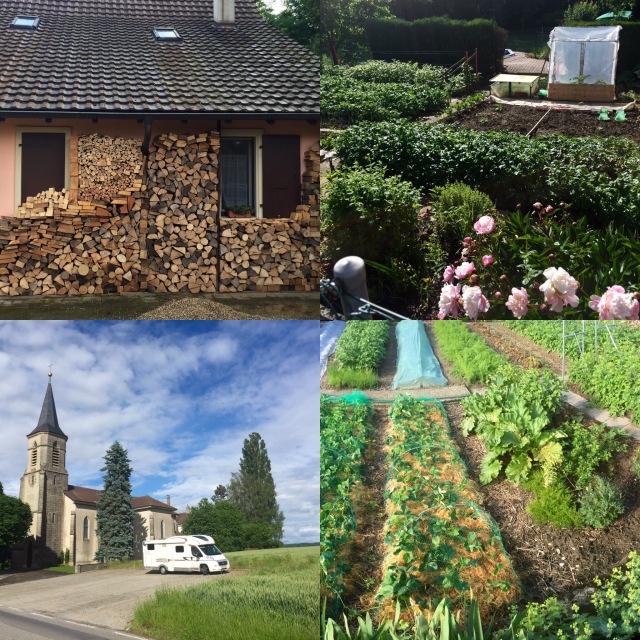 After two great days in this region of Switzereland we headed east on our way to Bavaria, stopping en-route in Zurich.  Not only was it raining but Zurich was a Motorhome drivers worst nightmare, there was roadworks everywhere, making it difficult to get a park anywhere.  We eventually found a spot only about 500mtrs up a side street from the harbour in a construction zone, which was vacant as it was Sunday, great for a 3 hour stroll.  We looked around and even though there are some beautiful buildings in Zurich it was not a really appealing city ( maybe have to try when it’s not under mega construction )   SOME PHOTOS OF ZURICH HERE >>>>>>>

We left Zurich and continued onwards toward Bavaria, as it was raining steady we pulled into another little town on the back roads toward Schwangau, a great small very historic, once walled village called Isny im Allgau, we spent the night here and cycled around the village for a while, it was a Germany Euro cup game so the place was nearly deserted.

Next morning it was of to Bavaria and Neuschwanstein Castle which was only a 100klm drive further on.  We arrived late morning and as we intended to stay here for two days we found a Motorhome park nearby.  As it turned out this was probably the best Motorhome / caravan / RV park we have ever been in anywhere……. They do it in van parks a bit different here, you pay for your site, a park worker attaches your power lead & you pay by the KLWH, so it does not cost much, you do not hook up to water as all motor homes etc here have there own showers and the amenities are so clean you use them..